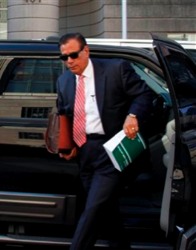 My husband and I were in distress when our son was accused of domestic abuse by a longtime partner. We didn’t know where to turn until Jerry Ballarotto  was recommended to us. He was tough but fair and ultimately made sure of the right outcome. We are very grateful that his legal acumen, people skills and insights into our justice system led to the appropriate results. Jerry is our guy anytime we need legal help in the future.

“Jerry stood up for me when I was unable to do it for myself. A few short months later we had a deal on the table and I was dismissed of all charges. Jerry did it! He is my savior and guardian angel.”

When I was feeling the worst about my case and it felt like no one was my side – Jerry was on my side.

When the judge said “Do you know what will happen if you get convicted?”
I spontaneously paused for a few seconds and in that few second period of time Jerry read my mind and answered for me.

“We have been trying to talk to the opposing counsel for the last five years but they will not negotiate. We have offered a number of options to them and it seems none is to their liking.”

That was the turning point in this case and the judge said to the opposition, “I think you can work out a deal. ”

Jerry stood up for me when I was unable to do it for myself. A few short months later we had a deal on the table and I was dismissed of all charges. Jerry did it! He is my savior and guardian angel!

In fighting the government, it helps to be innocent. It’s even more helpful to be represented by Jerry Ballarotto.

As he utters the words, almost in the same motion, he walks back from where he came, where his lawyer (Ballarotto) now stands, where he, at least for the moment, feels safe.

As an adversary, you have to watch him all the time. He really knows what he is doing. You have to bring your ‘A’ game. He’s extraordinarily zealous in defense of his clients.

The Maestro of the Courtroom

In 2007 I was indicted on twelve counts of conspiracy and wire fraud in a nationally-publicized case of corruption in Iraq. The government wanted me to testify against three co-defendants, who I did not know, and give details about Iraq, a country I had never been to.

To make sure I got the message, they had me arrested in Romania and thrown into Romanian jail for three months. It was an absolute horror, straight out of the Gestapo.

I refused to bend, and hired one of the pre-eminent law firms in Washington DC, which in turn hired Mr. Ballarotto as local counsel for the trial in New Jersey. After several months I switched to a major law firm in New York – with the request that they retain Mr. Ballarotto.

The case file consisted of 200,000 pages of documents. The preparation for the trial took an entire year. The trial took two months. Result? I was the only defendant who was acquitted, and in fact, acquitted on all counts.

In his cross-examination of witnesses and his closing argument, Mr. Ballarotto proved himself to be a maestro of the courtroom. He was lucid, forceful, and clear in his presentation – and even humorous. He had the jurors transfixed: he knew the case cold, he identified the key issue, and he exposed the government’s key “cooperating witness” as a two-faced weasel. It was such a blowout the prosecutor got so frustrated she called Mr. Ballarotto “a liar” (much to the amusement of the judge and the jurors).

What I most appreciate about Jerry is his passion. Unlike many white collar defense lawyers who want to make a deal with the government and move on to the next client, Jerry has a capacity for rage against injustice which gives him – and the client – the strength and energy to carry on.

He is a fighter who most memorable words to me were, in the early days when I was weighing a plea deal to avoid the horrors of a trial, “I will not let you lie to a judge and confess to something you did not do,”

For that alone, I owe him a great debt.